Who is Who at Leckmelm 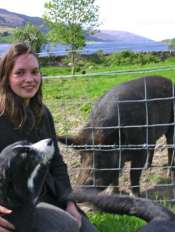 "I came to run Leckmelm aged 21 when my Mum and Dad died in 1998.  Quite a responsibility to take on, but lots of support then and to this day from friends and family.  I have worked in the holiday cottage business since young whether helping fold brochures, counting coins from the electric meters back in the 80s, cleaning, painting cutting the grass.  I changed a few things, my Dad first started the holiday enterprise in 1962.  I brought in things like online bookings, said goodbye to the carbon copies and in 2004 I took the bold decision to demolish the old Lochside Cottages and completely rebuild them.  One family of guests have been coming each year, twice a year since 1962 - they know Leckmelm longer than I do"

"If there's a chimney pot loose or TV aeriel gone askew I'll give it a go, I used to be an industrial abseiler before I met Lucy and moved to Leckmelm."  Also known for his ability to fix Satellite boxes, cars and flood restoration damage when the farm was hit by a flash flood in 2014.... 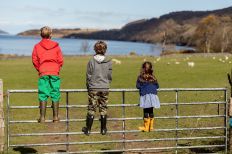 Danielle is a multi-talented multitasker.  A self confessed lover of book-keeping, sheep and pigs.  She has been helping out at Leckmelm since 2005!  At home she and her partner run a croft with sheep, pigs and ducks and a B and B

Shona has worked here since 1990.  She keeps us right and has been known to dance to Country and Western music! 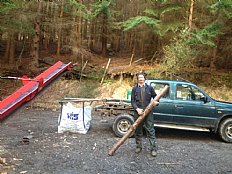 Shepherd to trade here on and off since 1983 and Crofter a few miles north of Ullapool. Shearing, lambing, cattle droving and general mechanical know-how.  I've heard told he's good with a landrover.

Brian Wilson of Wildland Services is a master craftsman drystone waller, thatcher and runs courses in these topics as well as making wood fired pizza ovens.

Adrian Morgan of Viking Boats does repairs and new builds.

Fenella who lives at Leckmelm runs the famous Seafood Shack with her business partner Kirsty.  Last year they won the BBC Radio 4 Food and Farming Award for Best Street Food or Takeaway.

About Us
Getting To Leckmelm
Testimonials
“A stunning spot in the hills with beautiful views through the woods and along the loch. The house itself was spacious and warm and so welcoming we didn't want to leave! I would happily recommend it to anyone and everyone....”
Ross (via TripAdvisor)