Last month I was amazed to receive an email all the way from South Australia. An engineering researcher, Gabriela Szondy, with a self confessed interest in corrugated iron had sent me a journal article and picture from 1884. 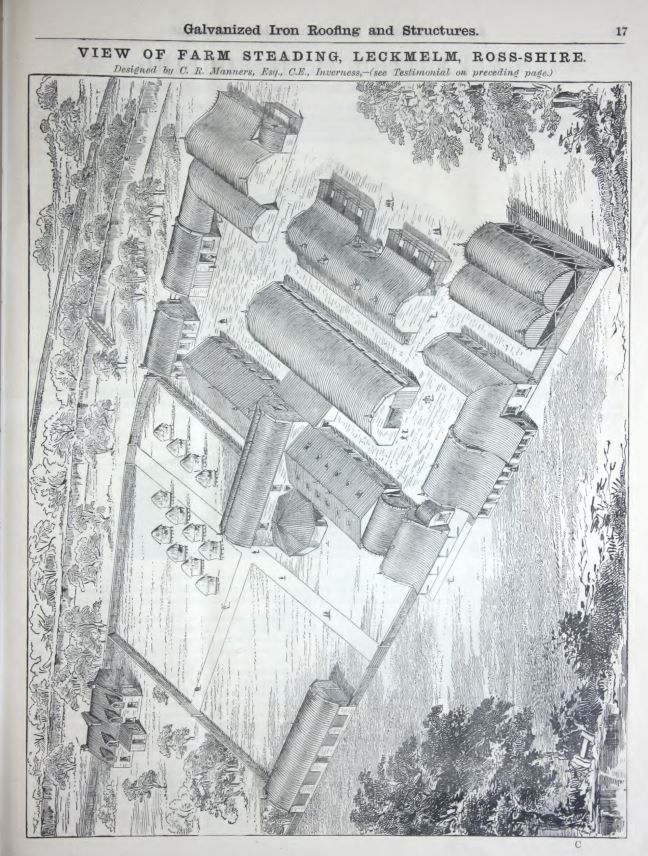 I was amazed to see the farm as I had never seen it before, almost like a model you would see in a toy shop or museum.  Gabriela had contacted me as she had google-earthed the farm today and seen that the original corrugated iron roofs were still in place and was asking me if that was indeed the case.

Folks are often amazed when I say that the farm roofs were manufactured in 1881.  They now are weathered a little rusty in places, but still generally sound. Yes, we have lost a couple: notably a storm when I was aged about 10 which blew away the hay shed into a field beyond the burn.  More recently the storm of 10th January 2005 we lost the roof of the sawmill and the old vet and med shed. 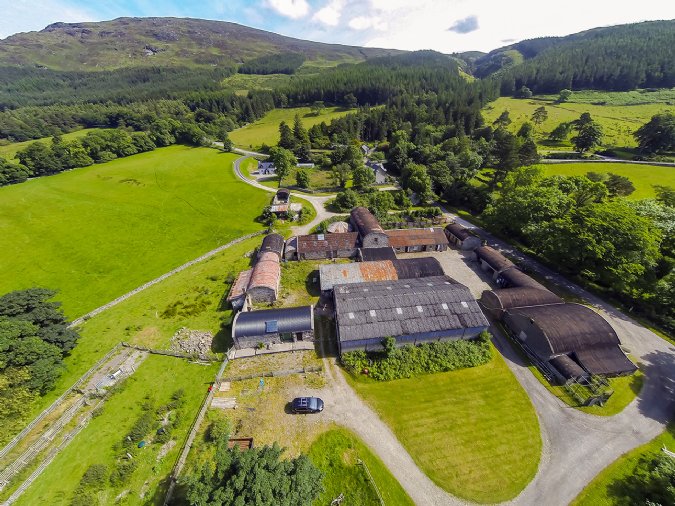 We are still fixing the sawmill, bit by bit and you will see this when you enter the farm the roof has been made safe for now and we are re-pointing the old stonework using lime mortar, the old way.  It seems the old ways are the best as you cannot beat the corrugated iron at Leckmelm.  Its the same on the houses at Campbellton - you would not think the roof dates back over 130 years.

The journal also contained a testimonial from the Estate factor at the time, Mr Manners:

"Dear Sirs.....I must take this opportunity of congratulating you upon the way in which the steading roofs stood the extremely severe test of the late gales.  The whole work stood the test admirably.  Yours faithfully C.R. Manners   12 Lombard Street, Inverness.   13th December 1881."

Inspired by Gabriela's research I decided to research the company that had made the roofs. A and J Main, Clydesdale Ironworks.  This biography taken from Glasgow University is a fascinating back ground to the company:

"A. & J. Main & Co. Ltd were gate, bridge and established in the later 1860s in Port Dundas, Glasgow, by brothers Alexander J. and James A. R. Main, who were an estate factor and an iron-gate and wire manufacturer respectively, originally from near Edinburgh. They developed their own patent for continuous bar-fencing, self-supporting wire fencing, agricultural gates and stable fittings.  In the mid-1870s, the firm opened the Clydesdale Iron Works, Possilpark, making complete cattle sheds, hay-compressing machines and game-proof wire netting. They also produced garden seats, lawnmowers, galvanised iron roofs and prefabricated fireproof sheds, and in the 1890s claimed that 'Main's Waterproof Covers have the largest sale and ... are the best in the world'.

Alexander died in 1873, leaving branches in Glasgow, Edinburgh and London to his brother James, and son, Robert. James died at his home in Skelmorlie in 1896, a coastal resort town popular with wealthy Glasgow businessmen.  Robert, and a second-generation James Main Junior, continued into the 20th century as a firm of structural engineers. They incorporated the business of the Arrol Bridge & Roof Co. around 1908, taking over the latter's Germiston Works, Springburn, Glasgow. A. & J. Main closed down in 1968."

The West of Scotland once had a steel and iron industry unrivalled anywhere in the world.  Now this is almost gone with only a few industries remaining.  Today I heard in the news the Dalzell steel works are to be re-opened which I hope will retain jobs for people.  There is so much Scottish industrial history in this farm alone and it is important not to forget the quality and precision of Scottish engineering from another era - techniques that are probably lost in modern day manufacturing.

News Headlines
Testimonials
“We managed to get some mountains ticked off, do some mountain biking, or just a walk along the Loch to Rhue. Saw some otters there, but the highlight of the week was a Sea Eagle just outside our window one morning! Once again, thanks for all your help. Best wishes, Maldwyn Roberts (on behalf of Clwb Mynydda Cymru).”
Clwb Mynydda Cymru